Trinidad and Tobago's participation in the International Olympiad in Informatics 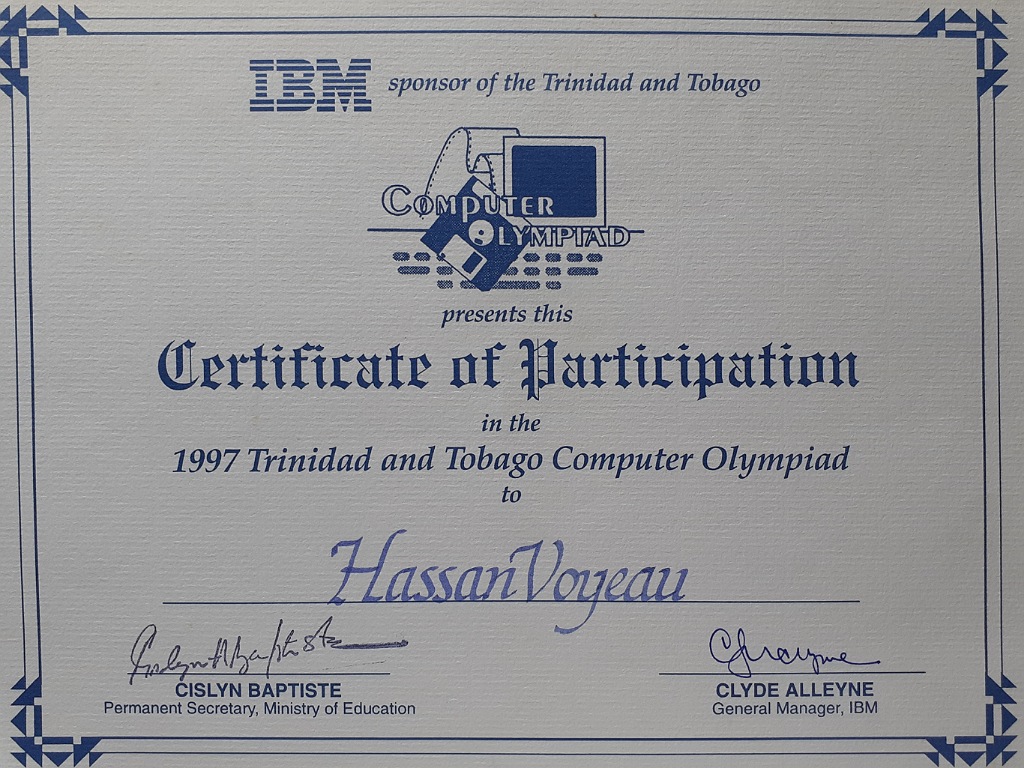 Professor Noel Kalicharan has passed away recently. May he rest in peace. I remember him as being the organiser for what we called the Computer Olympiads for secondary school students. I was attending St. Mary's College at the time. We would submit solutions to programming questions and then be selected to participate in the next round of the selection process at the Roytec computer lab. I never made it past this round. Winners after that round would be trained at UWI under Kalicharan and then another selection made to fly to the international competition. The local awards ceremony would usually be held at Algico plaza.

When I went on to Morehouse College I would participate in the ACM contest and one time my team placed 2nd in our division having gotten 3 questions correct. I see that UWI and other tertiary schools have been participating in the ACM-ICPC contests. At one point we also had participants in the Microsoft Imagine Cup. We really need to promote our participation in these types of contests locally. We have not participated in the International Olympiad in Informatics since 2013.

We have participated 15 times between 2013 and 1992. We medalled 3 times. Bronze by Ravi Ramkissoon in 1995 and bronze by Xin Zheng in 2000 and 2001. I remember Ravi Ramkissoon from St. Mary's College. He was one year ahead of me. I remember him as being a genius and someone I look up to. He was also a president medal scholarship winner. In 2017 I had emailed Noel and asked him, is the Computer Olympiad still running in Trinidad? His reply was as follows, "We run it when there’s interest from schools/students. This interest has been declining in recent years. Seems that not many people are interested in computer programming (most find it too difficult, even at UWI)".

Where do we go from here? I have contacted a senior lecturer at UWI to get more info. I am also going to ask Minister Hassel Bacchus about this. Participation in the these contests will help to keep interest in ICT and coding. We need coders to build out the systems in our country's digitisation strategy. Last year we did not have the 2nd iteration of the HackTT hackaton because of Covid and I am thinking that we should still hold the contest virtually. The first contest came in for a lot of praises.

December 08, 2022
The latest Stack Overflow survey results  is out. I wish we had a similar survey for Trinidad and Tobago and the region. It is useful to get a sense of what developers are wanting, what they are using, the challenges and so much more. Software developers form a large group of the tech ecosystem. The hardware is useless without the developers. Quality systems and processes take skillful developers. I looked through the survey results and these are my quick takeaways - Many persons are choosing coding as a career path - Perl language has lost its popularity in the developer space to other languages. This has been for some time. But Perl developers are highly paid and in demand. So you can make some money by learning an older language. - Trinidad and Tobago had a measely 20 persons complete the survey. This is unacceptable. - 53.06% of respondents started coding between 11 - 17 years of age. This fits with my idea that coding should be mandatory in Secondary school. - 91% of all responden
Read more

December 02, 2022
It is not easy to write a blog post and say I suffer from mental illness. It feels like this is something I should keep to myself. There is certain amounts of stigmatisation. From my experience workplaces in Trinidad need to be more open to hiring mentally ill persons. Persons should not be afraid to say that they are mentally ill and would require certain allowances like work from home, time off for monthly clinic visits, paid sabaticals and enclosed cubicles for example. In general we need better allowances for the differently abled in Trinidad and Tobago. The disability grant that the differently abled get is not enough to get by. It assumes that you have a place to stay or you are living with your parents. At the very least the government should be making incremental increases. Also special provisions can be made for dental work, wheel chairs, other equipment and other needs. TATT for example has a great subsidy program of $600 towards the purchase of a smart phone for the differen
Read more

November 24, 2022
I was scrolling through Facebook and came across a post stating that according to a leaked memo we will see eSIM launched by Digicel tomorrow https://www.facebook.com/622328941183335/posts/ eSIM is a chip embedded in your mobile phone rather than a physical removable plastic piece that we currently use in Trinidad. The US version of the iPhone 14 only supports eSIMs and locals are used to ordering their iPhones from the US. Hopefully this spurs on bmobile to quickly follow. A search on Digicel's website lead me to this article that gives official information such as "eSIMs will officially launch on 25th November, 2022." Check to see if your phone is supported and decide if you want to switch https://support-tt.digicelgroup.com/hc/en-us/articles/9950628857485-Digicel-eSIM
Read more

How can you make money online in Trinidad and Tobago?

April 04, 2022
This is a common question. Maybe you are now out of school. Maybe you are looking for a side hustle. Trinidad and Tobago has good internet infrastructure and good options for high speed broadband internet and mobile internet. We have cheap electricity. We have free education. We have no taxes on computer equipment. We have an enabling environment for persons who want to make money. One question that will arise as you make plans for your hustle is how do you accept payments online? Services like Paypal are not officially supported in Trinidad. Wipay is an alternative that was started in Trinidad. If you are getting paid through Youtube and adsense you can have a check mailed to you. If you are working for a remote employer you can have them wire transfer your salary. If you are advertising your services online, it helps to have a strong online presence. Make it easy for potential clients to find you and interact with you. There are freelance services marketplaces like Fiverr. There are
Read more